A review of the Oura ring - a sleep-tracking wearable

I've now worn my oura ring every night for 6 months and it tells a story.

The oura ring was one of the lesser-known health trackers up until the COVID-19 outbreak. Since then, it has received a fair amount of attention because of claims that it might provide an early indication of infection.

The NBA purchased over 2,000 rings to allow the players to track COVID symptoms. Before this, Oura began a study together with UCSF which all Oura ring users were able to participate in to help them learn more about just how accurate the ring could be at detecting symptoms. The study is still ongoing, and it's great to see the ring being used in this way.

Before COVID struck, the Oura ring was only really known amongst health nuts and people with an interest in studying data on themselves in order to optimise themselves.

What does it do?

It tracks a lot of metrics while you sleep, including:

The main selling point for me was its tracking of heart rate variability (HRV) whilst sleeping. Attention towards HRV has surged recently with claims that it can be a scarily accurate indicator of how stressed your body is.

In the simplest terms, HRV is the variation in the time between each heartbeat. As a one-time measurement, the metric isn't particularly valuable because it's different for everyone. However, by tracking your own HRV over an extended period of time, you're able to see patterns emerge.

If your body is under stress, HRV drops. The stress could be from an extra-hard workout, or it could be mental stress. It could be because you are getting sick and your body is already in defence mode trying to combat the infection.

Conversely, if your HRV trends upwards, it means your body is well recovered and ready for a challenge.

The fascinating part for me is the claim that your HRV might give an early indication of your how your body is doing, even before you feel something is wrong.

See the footnotes for more on HRV 1.

The rest of it

The other metrics are still very interesting although perhaps provide less potential insight.

The actual veracity of Oura's sleep tracking has indeed been questioned (as has that of most 'wearable' sleep trackers). Short of spending the night in a sleep lab, it seems pretty difficult to get accurate readings.

As a device, the ring is pretty damn cool. The amount of tech packed in there is impressive.

Having worn the ring for 6 months I've been able to build up a good amount of data. With each extra data point it becomes easier to spot trends and build up a big picture of your health.

The most striking insight for me has been to actually see, in data, the physiological effect that alcohol has on my sleep.

I wouldn't say that I'm particularly tolerant of alcohol anyway, and because of this I don't drink regularly at all, but when I do decide to indulge, my ring definitely knows.

Here is an example of my resting heart rate on one such night.

On normal nights, my average resting heart rate while asleep is at around 40bpm (the dashed green line). The night after drinking, it was 54bpm. That is not a small increase.

Other than being sick, I haven't found anything else to have a comparable effect. A hard endurance workout might raise it to 47bpm, and that's understandable because my body is then trying hard to recover and repair. Alcohol doubles that increase.

A key indicator of how restorative your sleep is is how long it takes your resting heart rate to stabilise during the night.

Here is a 'normal' night's graph, which is mostly flat: 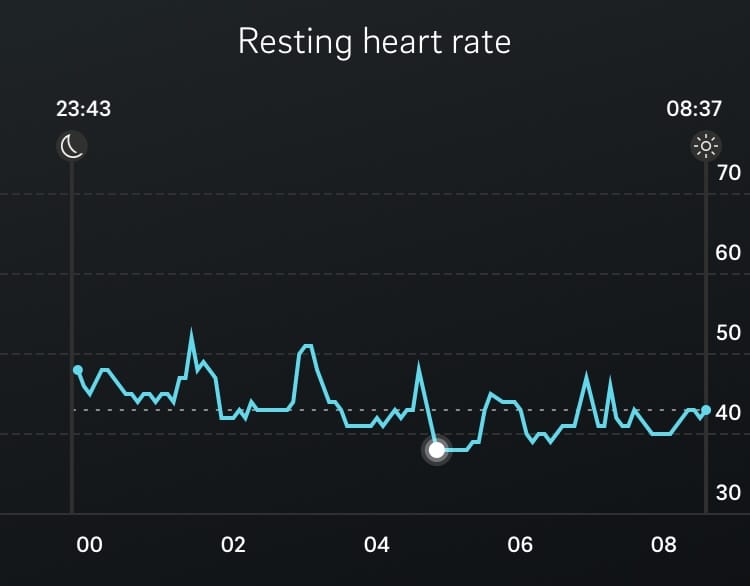 And from the same night above after drinking: 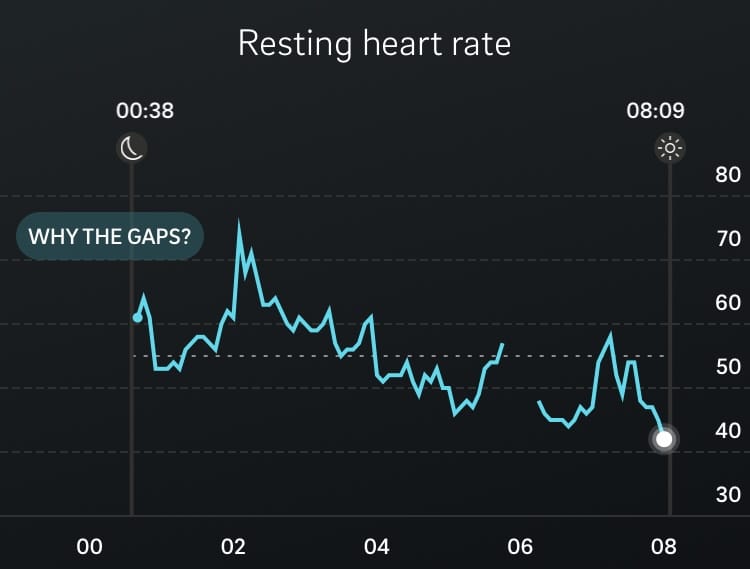 And the scary part? This was only after 3 small glasses of whiskey!

It's one thing feeling like shit the next day, but to actually see the effect a bit of alcohol has on your sleep is a sobering experience.

Nothing appears to positively affect my HRV quite like regular exercise.

None of this is particularly groundbreaking. Alcohol has a negative effect on sleep and general wellbeing, exercise a positive one. We already know this both instinctively and empirically.

What a tracker like the oura ring does, however, is remind you in a quite visceral way.

Seeing an upward trend in your sleep and health data is a great motivator to keep exercising regularly.

Knowing how bad your sleep will be if you have that one extra drink might make you think twice.

Couple this with the less-proven claims like early detection of illness, and the benefits of such an easy 'intervention' start to seriously outweight the costs.

It feels as if we are only beginning to scratch the surface of what data like this can tell us, which is both exciting and a little scary!

Spark is one idea, once a week, emailed to you.